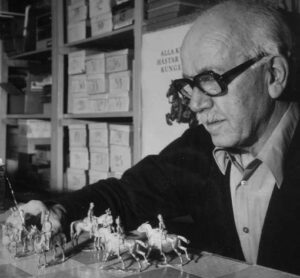 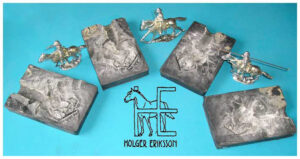 Holger Eriksson cast his first miniature figure in 1934, an event that became the start of a unique artistic career.The figure was produced entirely by him, from sketch to modelling, mould, casting and cleaning to painting.

Holger Eriksson was born in 1899, in the village of Bolhyttan, Sweden. The family moved to the town of Filipstad in 1901, were he later went to school.

At the age of fifteen he was employed as an errand-boy at a drawing office and advanced to draughtsman. In 1929 he moved to Karlstad, to become a designer and drawing office manager.

He had had an interest in military tin figures ever since he was a young boy. But it wasn’t playing with tin-soldiers that fascinated him, it was rather the small sized sculpturing. Already in his childhood and youth he drew horses, in motion or resting, with or without riders. The riders were mostly soldiers and they naturally had as correct a uniform as possible. An interest in uniforms, and later regimental history, was awakened. National service in the garrison town of Boden, where most of the army’s arms were represented, gave rich opportunities for detailed studies.

About 1925, Holger Eriksson started to sculpt in wood.  He carved horses, cowboys and indians, camel riders, knights, foot soldiers and a field gun, all in 54 mm. Later, the idea of casting figures matured and he cast the first figure with the initials HE on the base, as already mentioned, in 1934.

Charles X, Charles XII, Gustavus Adolphus, Oscar II, Napoleon, mounted vikings and cavalrymen from different periods are part of his production 1935-38. In 1936, Holger Eriksson participated in a miniature figure exhibition in London with a “Scots Greys, 1815” and was awarded second prize. During the following years he had a lively exchange with British collectors, which is why a large part of his early production is in Britain.

1944 saw a breakthrough for Holger Eriksson’s figures.  Among others, he made a group of nine WWII German stormtroopers. A Swedish collector with contacts in the USA sent the group there. The artistic quality of the figures attracted great attention, which led to international commissions. Between the years 1944 and 1956 he made hundreds of originals for an Irish-American factory in Ireland and a Swedish one in Cape Town. Both factories are long gone.

After 1957 Holger Eriksson kept his originals himself and only made castings for interested collectors and museums.

I will  continue, according to Holger Eriksson’s wish, and as long as masters and moulds are serviceable, to deliverHE military tin figures to collectors. 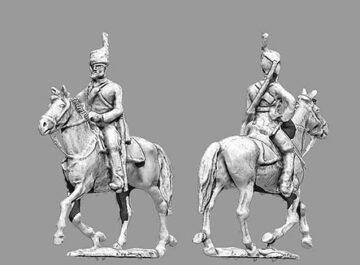